So you’ve finally decided to zap that tatt. Congratulations! You’re not alone. As much as 48% of the population in Australia are tattooed, and as many as 50% of the people eventually want to have laser tattoo removal.

Some people see results immediately. But most have to undergo a series of treatments before they see a significant difference. The number of sessions depends on the amount and type of ink used and how deeply it was injected. Also you must wait six weeks to eight weeks between sessions to allow the pigment residue to be absorbed and eliminated by the body. But patience pays off when it comes to laser tattoo removal–before you know it, that tattoo will be long gone.

HOW GOOD IS THE LASER?

The Nd:YAG laser 532 nm is designed to treat brighter colours like red, orange and yellow, while the Nd:YAG 1064 primarily treats black, blue and green inks. It is probably the most appropriate laser for tattoo removal in people with darker complexions. Other lasers such as the Q-switched Alexandrite and Q-switched Ruby have been used, but there is a greater risk of light or dark marks and scarring developing in the skin. In fact, the Nd:YAG laser 1064 nm has the deepest penetration, meaning that it carries the least risk of hypopigmentation.

The Ruby laser is designed to treat blue and black inks, but green, red and yellow inks will usually fade with a series of treatments as well. It’s also a good option for those whose tattoos are located on parts of the body which are prone to poor healing, such as the hands, legs or feet. The Ruby laser doesn’t leave behind scarring, and minimal care is required after the procedure. Amateur, traumatic, and medically placed tattoos all respond well to the Q-switched Ruby laser.

With the Ruby laser, professional tattoos that have yellow, red or green pigment fade less than black tattoos.

Alexandrite lasers are capable of removing blue and black pigments, as well as having been credited with the ability to remove green tattoo pigments better than any other laser. Green is often the only color left behind after treatment with Nd:YAG lasers and may be the most stubborn color for any other laser type to remove as well. The Alexandrite laser can remove both amateur and professional tattoos. It’s only drawback is that sometimes temporarily hypopigmentation occurs after treatment.

Professional tattoos require an average of 8.5 treatments for total removal, whereas amateur tattoos only require 4.6 treatments.

ZAP IT ALL AWAY

So what happens during a laser tattoo removal treatment? Before the session starts a medical professional will apply an anesthetic cream, and you’ll be given protective eye gear to wear, along with a cooling device. The medical professional will then gently place a hand piece against your skin and deliver laser pulses to the tattoo pigment. With each laser pulse, most people experience a sensation similar to a rubber band snapping against their skin. The amount of laser pulses depends on the tattoo’s size, but most treatment sessions only last a few minutes.

You may experience minor bleeding, redness, swelling and blistering for several hours or days following treatment. The next several weeks may see the treated area flaking, peeling and scabbing. Handle the treatment site gently. While the site is healing, you should avoid sun exposure and public swimming pools. Once the skin has completely healed (usually four to eight weeks after treatment), you can undergo additional sessions.

PICO or Not so sure?

We have seen a wide variety of clever marketing techniques which are currently being used to sway the consumer within the laser tattoo removal industry.
Education is key, to provide some insight into the misconceptions.
In order for the laser beam to directly target all colours of ink a Q-switched is required. Picosecond systems are usually limited to a single (755nm) or dual (1064-532nm) wavelength, These can not completely remove all the colours of inks. Nd:Yag which can deliver two wavelengths 1064 nm (targeting black) and 532 nm (for targeting red), but to remove green and light blue colours it is impossible.
These laser wavelengths in a picosecond speed contrary to the anecdotal claim, will not remove every ink faster.

It is quite common for some picosecond machines in the market to have a filter in the hand piece in order to replicate and produce a wavelength near to a Ruby (694). By doing this they deliver promises that they can treat green and blue inks but in reality it will not produce results because the filter reduces the output energy by half. The maximum available power of the picosecond machines are  200mJ-400mJ. This is NOT enough power to remove even the lightest examples of these bright inks, compared with TRI`s  Q-switched system, which uses 1000mJ of power!

There’s no other choice, really. Laser tattoo removal is the only safe and effective method to remove unwanted tattoos. After a series of successful laser treatments, most tattoos are pretty much gone. Keep in mind, however, that how fast your tattoo disappears depends on its colour pigments, depth, and age. But even stubborn cases aren’t hopeless. Though colours such as yellow, green, or light blue are more difficult to remove, they can certainly be faded. The same goes for ink that rests deep within the dermis.

Interest in trying laser tattoo removal? Then schedule a free, no obligation consultation today by emailing zaptatt@tattooremovalinstitute.com.au or calling 1300 490 390. 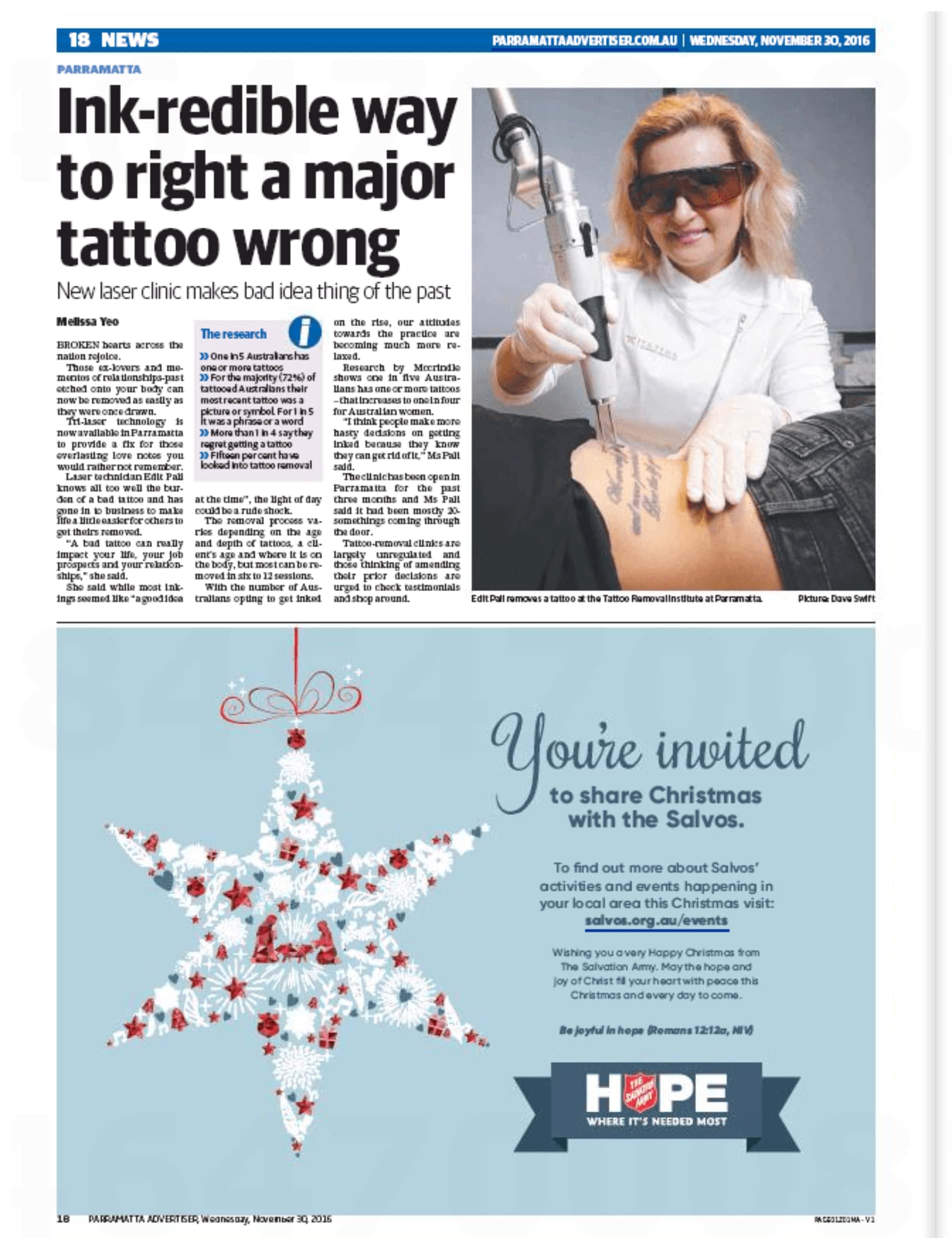